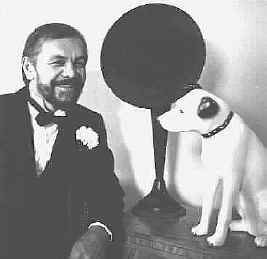 This website was created by Norman Davis who loves radio. His affair with the "magic box" began at the age of three. His parents, like most, had a radio and even though Norman's Mom was a devout Seventh Day Adventist who believed that most radio programs were fictitious--and thus, untrue and unlistenable, she allowed him to listen to certain "family" programs. They always gathered around the radio on Tuesday night when The Aldrich Family was on. "Henreeeeee! Henry Aldrich!" was the call that opened the show, followed by teenage Henry's frantic "C-c-c-coming Mother!" The Davis family also enjoyed listening to Fibber McGee & Molly, Dr. IQ, and Major Bowes Original Amateur Hour. Norman's Dad was fond of the Jack Benny Show.

Norman saw his first radio station when he was four years old. A baby sitter took him to the big city (Rapid City, SD) and up an elevator (for the first time) to the top floor of a 10-story skyscraper where there was a radio station. People were singing and talking into a microphone. Norman saw them through the glass and heard them on the speakers. He was mightily impressed.

His second experience came a year later, when his grandmother arranged to have him play his violin on her church's radio program. At 5 o'clock one Sunday morning, she took him to the station in Casper, Wyoming, where he scratched his way through Jesus Loves Me.

As he grew older, Norman found ways to listen to the radio while his mom was elsewhere. Sometimes he would play sick and stay home while the family went to church, so that he could listen to the kids' serials that played on Saturday morning. Or while Mom was down in the patch, picking blackberries, he'd steal a few minutes with The Lone Ranger, Sky King, Roy Rogers or Captain Midnight.

In his early teens, Norman acquired his own radio--a crystal set! He kept it under his pillow and would slip on the headphones when he was supposed to be asleep. He could pick up only a couple of stations, but on one (KIDO) he discovered that "I Love A Mystery" was on every evening.

When wire recorders came along, and then tape, Norman couldn't wait to try them out. He earned five dollars fishing golf balls out of a pond and rented a recorder for the weekend. Then he and his sisters created parodies of radio shows and taped them for posterity.

In college, Norman took the first broadcasting course he could sign up for at Boise Junior College (now Boise State University). This led to his first radio job on KGEM and the rest, as they say, is history. This website is a digital scrapbook of Norman's radio years.  Feedback is welcome.